Won Bin’s “I Love You and I Love You” was broadcast live on MBC’s “Show! Music Core“, and the performance was off to a good start until Hyuna forgot the lyrics around the 2:07 mark.

After the performance, a representative from Hyuna’s agency spoke with Star News and stated, “Hyuna rehearsed a lot before going up on stage but ended up making a mistake by forgetting the lyrics. She had a lot of schedules to go through before the performance and was unfortunately unable to show off everything she had practiced on stage. She is extremely sorry to Oh Won Bin.”

…I don’t get why Won Bin doesn’t let BEG Miryo to do it instead since she was the one featured in his album. Maybe scheduling conflict? Either way, I think that making mistakes is fine…just not on someone else’s comeback stage =.=”

Interesting…I came across a netizen’s article on FEMALE CELEBRITIES and their dark circles of humiliation…and at the end, Big Bang’s Seungri popped up. Pretty sure it was intentional but whatever, gave me a good surprise 😉

Other than that, it’s a pretty good list with numerous of pics of female K-celebs who, as the netizen say, either need a lot of sleep or has a bad liver. LOL.

END_OF_DOCUMENT_TOKEN_TO_BE_REPLACED

If you were a fan of Change, then you’re in for a real treat!

After dropping jaws of pubescent men everywhere, 4minute member HyunA is back at it again, this time changing it up (get the pun?) with a new track!

Rumor has it that the track is produced by E-Tribe (the guys behind a few small tracks you may have heard of called Gee and U-Go-Girl) and will feature Nassun, whose claim to fame is his vocal feature in Lee Hyori’s U-Go Girl. The track should be released on April 16th.

SBS Inkigayo live performances (with 2PM’s Taecyeon and Wooyoung still as MCs) are up!

END_OF_DOCUMENT_TOKEN_TO_BE_REPLACED

A netizen found out that KARA’s so-called powerful choreography for their new MV “Lupin” has been ‘inspired’ by many other artists (note that these are only comparisons and these stills don’t necessary look like the real thing it in the actual MV):

END_OF_DOCUMENT_TOKEN_TO_BE_REPLACED

On the February 20th episode of Star King, HyunA was seen at first dancing with some random muscular/fat/weird guys at first but guess who joined her afterwards 😉

Turns out hot abs aren’t only for the men because our ladies of Kpop also have something great to show!

This ab trend/fever is not only for male stars. There are a lot of female stars who are proud of their abs. They, too, exercise steadily to make chocolate abs that split into six.

END_OF_DOCUMENT_TOKEN_TO_BE_REPLACED

Round 1: MBLAQ vs. Rainbow

END_OF_DOCUMENT_TOKEN_TO_BE_REPLACED

KBS Music Bank live performances are added and…C.N BLUE grabs a win! OMG so happy for the guys!! They totally deserved it!! >0<

END_OF_DOCUMENT_TOKEN_TO_BE_REPLACED

Exercising is still best but HyunA’s tips are good too 😉

HyunA of 4minute revealed on Sang Sang Plus just last week that she used to weigh 40 pounds more.

Her diet secrets are now out and I think it’s feasible, because from seeing HyunA, you can tell it works.

There are two parts to her diet. One method is to not use the elevator and to keep taking the stairs. The second method is to not eat foods made with flour. So staying away from starch foods is probably a good idea.

HyunA stayed away completely from foods made with flour during the time of her diet. She would eat small meals very often throughout the day. Of course dancing would be her exercise.

Netizens commented, “It’s hard to believe that HyunA had lost so much weight when she was so young,” and “The effort she put into her diet and the passion she had to become a singer made her who she is today.”

She is the trend today!

Hyunah, who is currently doing activities for her first solo “Change,” has another flashy and special fashion that is attracting attention.

It has only be 3 weeks since her solo debut and she is reaching high ranks on music charts. She is also emerging as a star with luxury abs and her “pelvic dance.” Although she is young, she is showing sexy charisma on-stage and is being known for her “sporty pop look” style. This “sporty pop look” is a combination between sporty and hip-hop.

Hyunah had a unique style and made a new trend while she performed with 4minute, too. Her torn leggings were very popular and Change’s “sporty pop look” is becoming a new item this season.

Hyunah is making a slim tanktop with the latest glam and a hip-hop feel plus loose jeans look trendy and fitting. She sports (no pun intended) this “sporty pop look” with overflowing power on stage.

Check out her “sporty pop look” which is clearly shown during her performance on January 10, 2010.

END_OF_DOCUMENT_TOKEN_TO_BE_REPLACED

On January 23rd, Suju’s EunHyuk and SHINee’sMinho did some Kung Fu on “Star King” and they together with Suju’s LeeTeuk, they danced to HyunA’s song “Change”!

On the same day, SHINee’s Key and MBLAQ’s Mir battled it out on Idol Maknae Rebellion to girl groups’ songs: “Mister”, “Touch Me”, “Bo Peep Bo Peep”, “Marshmallow”, “Because Of You”, “Chu~♡”, and “Tell Me Your Wish”!

END_OF_DOCUMENT_TOKEN_TO_BE_REPLACED

►►Top singers whom netizens want to make citron tea for?

LOL for random polls! I researched and Citron Tea is actually a nice warm drink for the cold Winter days ^^ how cute~♥

There is a survey called “The singers whom you want to make citron tea for?” on the music portal site Bugs and Super Junior Kyuhyun has got no.1 with 64.49%.

Kyuhyun has received a lot of love from fans with his sweet voice in the solo song called “7 years’ love” in June last year. Many netizens said “While Kyuhyun oppa is singing a sweet song, me who are beside him will make tea and give it to oppa”, “Usually Kyuhyun seems to drink water more than soda drink so with the warm citron tea which is very good for throat, I hope him will continue singing the good songs”.

original article is here
translated by evanesco@sj-world.net
may take out with full credits

Since SJ-World only translated Kyuhyun’s part, I’m gonna use my limited Korean skills (I can read Hangul) so I am going to list the rest of the singers on the poll:

END_OF_DOCUMENT_TOKEN_TO_BE_REPLACED

LOL like it or not, GaIn and Jokwon is already on the verge of marrying each other XD 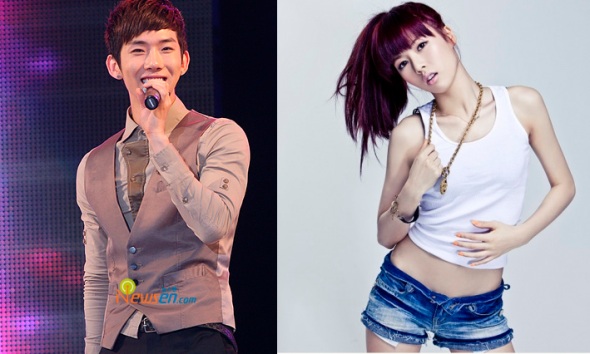 A strong candidate for the first love of 2AM’s Jo Kwon, ‘Oh Bang Shil’, will be unveiled on the January 23rd episode of MBC’s “We Got Married”. The person who has made Gain nervous is no other than 4Minute’s HyunAh.

HyunAh, who has a three year age difference with Jo Kwon, white complexion, and big eyes, fits the criteria for Jo Kwon’s “Oh Bang Shil” and has become a controversial figure. Because of this, Jo Kwon and HyunAh meeting in front of Gain has become a much more intriguing topic.

Gain’s suspicion is continuing and there are rumors that Gain has become uncomfortable because of Jo Kwon and HyunAh’s seven years together as trainees, where there was naturally some friendly physical affection.

Gain has become ‘Sherlock Gain’ in her ‘quest to find Jo Kwon’s first love’, which will be revealed on the January 23rd episode of MBC’s “We Got Married”.

T/N: If you guys weren’t aware, Jo Kwon came out a while ago saying that his first love was a girl by the alias of “Oh Bang Shil”. If you want to catch up on it, check out this article on AKP: Jo Kwon’s First Love

►►[VIDs] Behind the scenes of HyunA’s “Change” MV

4Minute HyunA’s behind the scenes of her “Change” filming and solo debut has been released exclusively through Naver Music!

See the hip-thrust in action! 😛

END_OF_DOCUMENT_TOKEN_TO_BE_REPLACED

►►Pieces of the Past: How did 4Minute HyunA used to look like Shin Jung Hwan?

oh~~ okay…geez at first when news of her coming out saying she looks like Shin Jung Hwan I was like “huh?” but now I kinda get it. Well the girl definitely got the natural beauty within her. just a little diet to slim down her round face that’s all 😉

On a recent episode of Sang Sang Plus, 4minute’s HyunA said that she used to weigh around 40 pounds heavier than she does now. Someone told her, “You look like Shin Jung Hwan.” She was so shocked by that comment that she decided to go on a serious diet.

Though she is known for the amazing sexy body that she has now, back then, she was just a bit chubbier.

Netizens have been commenting, “A diet saved a person’s life,” and “Her face looks different after losing the weight.”

4Minute HyunA gives a shocking revelation, “I lost 17kg because of Shin JungHwan.”

HyunA was on the last episode of KBS 2TV ‘SangSang Plus Season 2′ set to air on 19th January when she said that. And her revelation came as shocking as the singer has been gaining much popularity with her solo single release and trending hot pelvic dance.

HyunA said on the show, “For my body now, I lost 17kg.”
Known to love dancing since young, HyunA revealed that she has lost 17kg as compared to when she was in primary school.

She added, “The reason why I lost so much weight is because of Shin JungHwan. There is this famous celebrity, and he/she had told me back then ‘You look like Shin JungHwan!’, and I was in shock and started losing weight.”

Meanwhile, the G7 members for KBS Invincible Youth are guest appearances on the show which is set to air on 19th January at 11.05pm.

END_OF_DOCUMENT_TOKEN_TO_BE_REPLACED

MV: Lisa feat. Ji Yoon’s “Shall we get married”

END_OF_DOCUMENT_TOKEN_TO_BE_REPLACED

►►Caugh on Cam: 4Minute’s HyunA has a tattoo?

I’m pretty sure it’s fake (would you srsly have a tattoo with your own name on it? =.=;)